nothing worse than being in love
when there is no one to be in love with
and maybe it is all too appropriate
a sadness brought on by the weather
the sky is grey and tastes unnameable
raindrops fall, more real than the ability
to risk exposure, after burrowing in the soil
have seen stars collapse and all I can say
is "how are you?"

does no one want to plant their roots alongside-
thinking as outdated as the dances my grandparents attended
watch their simplicity behind fogged glass
longing to go home, at least I knew love once
as the night closes in
left mortal, to face the world-
"starless and fatherless"

more tragic then never knowing love
so difficult to break through the layers of decency
to reveal a seeking heart
perhaps, it is my lot in life
to be the one on the outside looking in
melancholy takes hold like an old friend

yet, hope relentlessly murmurs
filling the empty bedroom
asking for a second chance, free of the past
we could run away in the night
lovers as the world feints collapse
the heavens conspiring against individuality
as we fall asleep underneath the moon's blessing
at April 08, 2020 No comments:

The New Erotics of Isolation

the days go by unnoticed
time on standstill
a year and an hour
happen simultaneously
the realization of love
what is left at the end of the world?

meanwhile,
the cycles of the Earth continue
hair getting longer
heart beating slower
in need of the breath of life
mutual resurrection

where did desire go?
at the end of the world
why did I ever spend a moment speaking despair
when the sun was in the sky
and I could live my life
eye contact never seemed so spiritual

and how is the view from a spinning star?
when everything is so uncertain
death sweeping in as a war on the mind
working tirelessly, as we face mortality
can't hide in complex thought processes this time
to be seen and understood
to be able to say "I love you"
the gift of love
it took the sky to fall to rupture the myth of control
yet, nature goes on and offers its heart to the soul
the gift of love
the gift of love... 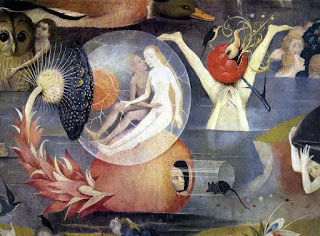 am I supposed to feel free?
trapped in a crystal ball
illusory control
I know I have committed every Sin
yet, God does not appear
punishment would be so sweet
around me, man becomes less than animal
engaged in every form of hedonistic melancholy
the desiring machine has run its course

sometimes, Eden appears to me in glimpses
undeserving, as we dance on the edge of Hell
man is the slave to his mind now
the serpent's offer getting lost in translation
around us couples scream desperately
unable to feel love, emotion a myth of the dawn
oh, to see the truth hiding there
the frightening loneliness obscured by the flowers

please, I cannot have another bite
gorged and gutted, my youth spent
cursed to never know innocence
what I would give to return to the garden
are we being held captive by an unattainable ideal
God doomed us all and I am in his image
sometimes I imagine Hell would be better
for Hell, it is said, has music
and I would be free of perfection at last
the ugliness rearing its head in darkness
showing the world as it is
drowning in Paradise, dreaded inheritance

I am a blushing acacia tree
sending archaic postcards to the rainbow meadow
where Pan resides with the fauns catching butterflies in Arcady
taste of dandelion wine offered by the fae folk
tastes golden in color, melting mind into honey
in the air a hint of prismatic iris, and lemon verbena
Pan rubs his horns on my outstretched roots
the horns are curved and rough to the touch
as he rests in the shaded grove, playing his flute
sounds so sublime the dragonflies are brought into a frenzy

visions arise in my mind's eye of the whole of nature in play
his heart on his sleeve as he insists upon his good intentions
he turns to me, remember, she is an acacia, he says:
"Panic, Natura nihil frustra facit."
animals around him chime in laughter with averted eyes
the moment the spell is cast, Panic transforms into a fair maiden
her hair the color of the rose petals in the elixir of life

Pan pulls Panic to him
until she is in a labyrinth
she wanders for some time
fearfully desiring the minotaur
soundless chiming of bells in the wind...

the arcane peach of dreams
calling to her, amidst the fruit vendors
farmer's market on a Sunday
bustling with every variety of man, woman and child
she watches the people live their lives, secretly
feeling wholly outside reality
he stops and proclaims, suddenly:
"I am the second most well-traveled man in the world!"
misunderstanding her lunar complexion
postcards collecting dust underneath her bed
representing all the places she has not yet been
"Hello, from heaven above!" one reads
physically: trapped in an ivory tower
every hour, her father tries to marry her
as it has been since she can remember

she is diagnosed with destinesia on her birth day
struck with onism as she looks at her soft hands
unable to take it for one more moment
"I will not have my wings clipped by reliable scissors anymore!"
she takes her chances and turns into a swan

flying away into the mountains, it is always the mountains
there arises the scent of golden marigolds, bringing her home
a drunken afternoon of mead, as honey is in abundance
so free at the summit, where the air deepens the breath
one day it will happen, as the soundless chiming bells carry her dreams in the wind

in the meridian
in the cool depths of the ocean
down to river - noontide
there, underneath the waterfall resides
Adam and Eve lookalikes, they embrace
through the miasma of the third eye

the flickering of a candle flame
then dawn takes on different faces
Lemuria offering paradise and a portal forms
darkness closes in, sky is clear and blue
First Anubis, then Horus
eternal night finds me during the twilight hour
then the lush forest slowly fading into day...

originating from seed
offset by ethereal sirius
intoxicated from twilight sleep
a loculus forms in the heart
undoing of the opalesce gem
with respect to, the grand architect
who created a lunette, especially for the stem
to start creeping, deeply growing
into the motionless abyss of acceptance

condemned by the satire that is to be found there
pass through, to a new horizon where the sunset
can be remembered for its fire and wisdom
hopelessness meeting infinity
self-immolation needing resolution
funeral pyre awaiting for the willing
in ashes arise the phoenix ready to be born again
free of the mayhem of conformity
at April 03, 2020 No comments:

evening seduces the night in shades of rose
the room shifts into violet, taking it slow
scent of lavender, unfolding in a lazy fog
last month's laundry, hanging on the vine
resting overhead: dreams reside
an altar to the ancient gods
crystals framing the world into view
there lit up, out of frame, is the moon
solitary realm of magic
how she hides behind smoke and mirrors
wearing silks and tasting redwoods
all alone, with visions of the cosmos
goddess hiding behind plastic flowers
anticipating love as she drifts off to sleep
at April 02, 2020 No comments:

within the depths of the earth

every season, growing
now a fresh bloom, inviting
in the springtime
it all began in late March
she is pulling down the sky
built strength through the raining years
sun almost blinding
garden murmurs and lulls
drunk on the afternoon breeze:
"so this is what love feels like?"

in the garden there is a hint of heaven
trapped by a butterfly net
illuminating a truth only she can understand
the bees pollinate, giving it away
she accepts her fate, the perennial ruminator
kissing the leaves as they fall down
and the winter brings momentary stand still
until next spring, when golden rays sing along
oh, to be a lifelong gardener
in conversation with the flowers

circling down the mountain
circling down the mountain
to where the pond water
meets the world-weary roots
solitary heaven looking down
he pecks at my bare shoulder
what I would give to lose language
to perch on the edge of reason
his claw marks biting into flesh
all is silent, until he cries
echoing in the gap between
I remain still, quiet
the faithful falcon arising above the trees
leaving behind the unnamed feather
at March 31, 2020 No comments: